On page 31, the selectmen were still speaking as Northborough selectmen had never spoken before: “The Roman God Janus, patron of gateways, was pictured by the ancients as facing foreward [sic] and backward so as to see both comings and goings. This mythological deity might serve as an appropriate symbol for the Town of Northborough during the past year.”

Surely the spirit of the Bicentennial inspired this novelty. Yet the decade of the 1960s itself may have helped. The vast majority of townspeople today were either not yet born or are members of families that had not yet discovered Northborough, but we all know that it was the decade of the Beatles, The Feminine Mystique, the first successful birth control pill, assassinations of political leaders, the war in Vietnam—many profound changes. The world was changing rapidly—and changing us. 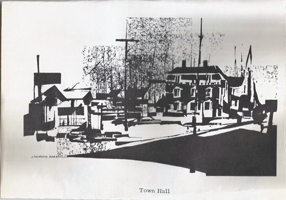 Who, aside from the selectmen, engineered that report is not stated therein, but the following year the new format and urge for novelty continued. The Public Relations Committee (one of its members being our own Jodie Martinson) contributed to the 1967-68 report. In one of its more daring moves it called upon a distinguished Northborough artist for many of its illustrations. J. Thurston Marshall was fully capable of representational art understandable to all of us, one example being his depiction of the Northborough Town Hall on the west wall of our museum, but his conception of the White Cliffs, next to it on that wall, reveals his fondness for the semi-abstract.

For his depiction of the Town Hall on page 10 he used his artist’s perspective, as he had in the White Cliffs painting. It should be remembered that “perspective” was the theme of that year’s report. Marshall’s Town Hall is recognizable, but many viewers must have wondered considerably about the accompanying figures. What was he thinking of? Was he rejecting the adjoining mall? Did he despise the actual steeple on Trinity Church? Perhaps only he knew. He and the committee were probably exhibiting their state-of-the-1960s boldness.

As a peruser of many old town reports, I marvel much at the habits of mind that produced them. Those of the nineteenth century are chockfull of numbers, usually following dollar signs, and very little else. They display an astonishing severity. If you owed only a few cents on your taxes, your delinquency would be reported. These habits persisted into the 1940s. Despite such revelations that would leave your neighbors free to gloat over your financial failures, the reports were monumentally dull. More recent reports carry fewer blocks of credits and balances and debts (although strikingly more digits after the dollar signs), and some of the contributors have used words well and even cheerfully.

As we approach the 250th anniversary of the town, most of us do not know what the committee planning the event will generate. Nor do we know whether the makers of the Northborough Annual Reports will strike new ground. For all we know, the now prevalent 8½x11 form may give way to something else: an on-line report perhaps with visual flourishes that might baffle even a person like J. Thurston Marshall.

Join us and become a part of history!